No “other”
No “race”
All allowed

All of African or Asian descent
shall reside
shall remain

All shall allow
all to remain

In this poem, I use erasure to address the erasures caused by past exclusionary and restrictive policies based on the concept of race, specifically restrictive covenants on property. Restrictive covenants which prohibited people of African and Asian descent from living in BC homes (unless they were servants) were standard, not only in West Vancouver’s British Properties, but also in Edgemont, Westmount, Upper Capilano, and the Vancouver neighbourhoods of Shaughnessy and Kerrisdale. (See “West Van councillor aims to scrub racist land title rules,” North Shore News, Jan. 21, 2020, https://www.nsnews.com/local-news/west-van-councillor-aims-to-scrub-racist-land-title-rules-3115307). Similar restrictive covenants are still registered in Land Titles Offices across the province, although legislation was enacted to declare them null and void in 1978. Two high school students took steps to officially remove one in 2019 on a 1908 house in Port Alberni, BC owned by Alan Webster Neill, a Member of Parliament who “supported the Indian Residential School System as an Indian agent and was pro-Japanese internment and opposed Asian immigration.” (See https://www.cbc.ca/news/canada/british-columbia/port-alberni-vancouver-island-racist-covenant-property-title-1.5277395) Restrictive covenants were used elsewhere in Canada and North America. But the anti-erasure theme of this poem can refer to other legal measures that explicitly supported racial segregation, displacement, deportation, and exclusion to create, maintain and enforce whites-only spaces (e.g. Head Tax legislation, The Chinese Exclusion Act of 1923, the eviction and internment of 22,000 Japanese Canadians, forced relocation measures undertaken against the Innu of Davis Inlet, the Squamish of Senakw, Black Canadians in Africville in Nova Scotia, and the exclusion of the South Asians on board the Komagata Maru, and the displacement of First Nations through the creation of Indian reservations, among numerous examples). 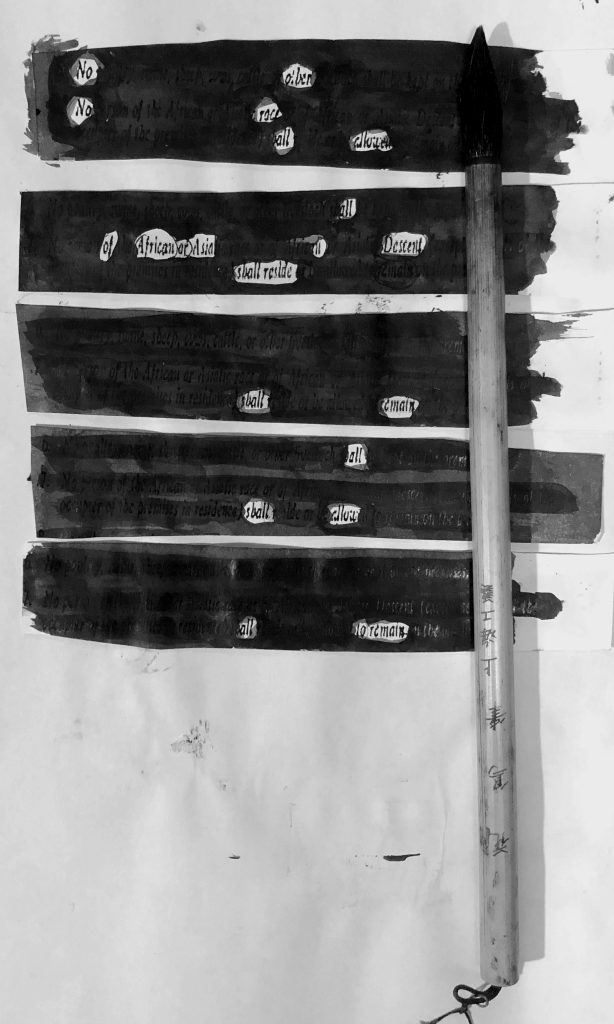