Judges: David Staines, U of Ottawa (chair), Louise Ladouceur, U of Alberta, and Faye Hammill, U of Strathclyde. 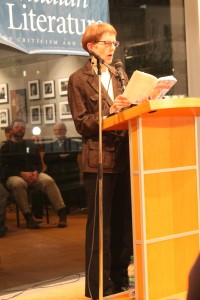 We are delighted to announce Meredith Quartermain has won this year’s Canadian Literature award for best article with T’ang’s Bathtub: Innovative Work by Four Canadian Poets. Quartermain describes herself as very much a full-time cultural worker. Her novel Rupert’s Land, her fifth book since 2000, is coming out this fall from NeWest Pess and she’s hard at work on another novel. She also runs Nomados Literary Publishers (designing, typesetting and producing chapbooks by other writers) and other cultural activities like the writing women’s network at Rhizome Café in Vancouver.

They found the essay highly ambitious in its engagement with big ideas—the renewal of poetic language and the relationship between poetics and politics—but also hugely attentive to the detail and texture of the poetry and essays considered. The author evolves out of this a very persuasive argument against the idea that poetry must be politically purposeful. At the same time, she acknowledges the power of the language experiments of poets such as Jeff Derksen, Roger Farr, Erín Moure and Lisa Robinson, to begin to undo social controls binding them to social injustice. In sum, the essay was intelligent, convincing, and beautifully written.

Annette Hayward won honorable mention for her essay Littérature et politique au Québec pendant la première moitié du vingtième siècle.” She is an Emerita Professor of French Studies department at Queen’s University, whose work focuses on Quebec and French-Canadian literature, in particular the institution of literature and writing by women. She is currently doing research on the Anglo-Canadian critical reception of Quebec literature. Her book La querelle du régionalisme au Québec:Vers l’autonomisation de la littérature québécoise (2006) is a pioneering work, based on exhaustive research that still stands as a benchmark of reference. Its publication earned it the Prix Gabrielle-Roy as well as her first Governor General’s Award.

It is quite a bold intervention, which sets out a very clear aim for itself and reaches an unambiguous and important conclusion: that there was no incompatibility between literary modernism and the old left in Quebec during the first half of the twentieth century (even though writers’ political orientations were often determined more by their milieu than by their literary tendencies.) This may appear too straightforward and definite a conclusion, but I think it is justified by the extensive evidence which is marshaled in this essay. Each example is outlined with remarkable conciseness and clarity, and Hayward also offers essential background detail on the political and literary history of early twentieth-century Quebec. These short contextual accounts are valuable in themselves—for instance I suspect that Anglophone scholars sometimes lose sight of the fact that a split between regionalists/nationalists and modernists/’exotic’ writers was just as much evident in Quebec as in English Canada. Substantial primary, secondary and archival research has informed this piece.

We thank the judges who assessed a set of four essays nominated by the associate editors from all the articles published in 2011, as well as the ACQL for letting us make the announcement at their annual prize reception.