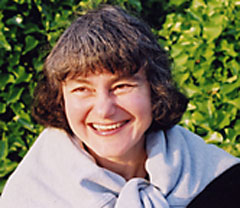 Crystal Hurdle teaches Creative Writing and English at Capilano University in North Vancouver. In October 2007, Crystal was Guest Poet at the International Sylvia Plath Symposium at the University of Oxford reading from her After Ted & Sylvia: Poems. Crystal’s poetry has been published widely in anthologies and journals, including Canadian Literature, Fireweed, The Dalhousie Review, and The Capilano Review, of which she was Fiction Editor, and on whose Board of Directors she currently sits.

Reading anything, not only poetry, is for me a source of inspiration. And doing physical activity such as walking, jogging, cycling can really get the creative juices flowing. Stuff that has been composting in the brain suddenly gels (to mix a metaphor on purpose!)

For me, the idea of author as ventriloquist of other voices greatly appeals. I have become increasingly keen on the monologue since using it in After Ted and Sylvia: Poems, in which I adopted the voices of Plath, Hughes, critics, authors, family members, and others involved in the scandalous literary romance. While each of several voices claims to “speak,” no voice listens; thus, communication occurs only in the integration of the disparate texts by the reader. Voice becomes narrative. And it’s great fun! Acting on the page rather than on the stage.

I didn’t write much poetry in my teens, but I was mesmerized by Sylvia Plath’s “Lady Lazarus” in a first-year Poetry course, and perhaps she became a muse that early on… Seeing the British houses in which she and Ted Hughes lived was a true delight and inspired a flood of poems. I suggest that you discover a passion and pursue it.

Do you use any resources that a young poet would find useful (e.g. websites, text books, etc.)?

Readers are writers, and writers are readers. I’ve always liked how the fall authors’ series at Granville Island in Vancouver is dubbed “writers and readers festival,” recognising how fine the line is, noting the overlap. It’s great to attend such events. As a constant reader, I find treasure in other written work, including my favourite, Vladimir Nabokov’s Lolita, which has been a source of inspiration.