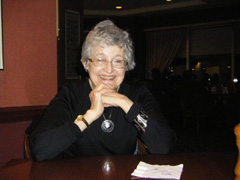 Poetry prizes won by M. Travis Lane include the Mary Harding Baylor Prize 1952, Northern Light 1975, the Pat Lowther Memorial Award 1980, Arc 1982, Fiddlehead 1991, New Brunswick Writers’ Federation 1994, Amethyst Review 1997, the Atlantic Poetry Prize 2001, the Alden Nowlan Prize for Excellence 2003, and the Banff Centre Bliss Carmen Poetry Award 2006. She is included in The Dictionary of Literary Biography: Canadian Writers Since 1960, ed. by W. H. New, and is listed in both the New Brunswick Library Encyclopedia and Atlantic Canadian Poets’s Archive. Her work is included in over two dozen anthologies. She is a Lifetime Member of the League of Canadian Poets and Honorary President of The Writers Federation of New Brunswick.

As soon as I could print. My family all loved poetry and liked to recite it and to read it to us. They recited poems or sang songs while doing housework or when taking long drives in the country. My father, my aunt, and my sister all wrote poems, and my mother wrote stories. I wrote poems in grade school. My first poem was published when I was eleven (in the local newspaper.

What inspires me? Everything: nature, science, the news, art, music, something someone has said, most of all, other poetry.

When I write a poem, I think a lot about how it sounds, and I revise a great deal in order to get the sound right for the subject. “What Can Be Named in Numbers” started because I had been looking out my window and admiring the beauty of an insect’s flight. I wanted to write a poem that would reflect or imitate that beauty.

In college I learned that much philosophy consists of trying to use words whose meanings can be clearly defined, in a way everyone can agree about, the way we can agree about words we use in math or science. But the word “beauty” has no exact meaning, and we don’t always agree about what it is. Some people looking out my window might have said “Ick, a bug!”

But we do agree about numbers. When I said to myself “What can be named in numbers” the even rhythmic sound of that line appealed to me; I wanted to finish it off with a rhythm that repeated the rhythm of the beginning and carried on with the “rs” at the end of the word “numbers”. So the sound that started me on the poem was a conventionally metred five beat line: “What can be named in numbers reassures.”

Then I decided that this line was not a good first line for the poem; it is more like an ending line. I did still want to start with a basic five beat line, but something less melodious. Then right after the introductory line I wanted to change the sound altogether—no more five beat lines, but something sort of flat or bang, bang- ish. I wanted to use real numbers: not “five” but “5.” And, as a contrast to the insect’s flight, I wanted something rectangular.

But that would not be the right sound for the insect stanza. So I tried for a long swooping sailing sound, and broke up the line to imitated the leaps and zigzags of the bug. (For fun I stuck in a bit of math there: “divide” and “ration”.)

Then I do a zigzag of my own. Instead of going on to say how beautiful all this is, I change the direction of the poem and ask, does this beauty require us in order for it to be beautiful?

Since poetry is not a science, any teacher, web site, or book, that tells How to Write a Poem is just offering one person’s opinion. Another person might have a very different opinion. The best way to learn about poetry is to read it: begin with the famous Great Poems and with the famous Popular poems, and then go on to read new poems, silly poems, serious poems, song lyrics, everything. Taking a course in literature is a good way of discovering new poems.

I think it helps when schools can get local poets who can read their work out loud well to read their poems for the students. A lot of students have never learned how to hear what they read, so hearing a poem properly read can show them what the pleasure of poetry can be.

It would also be helpful; if teachers could be taught Not to say “What is this poet trying to say?” A poem is not a code. The point of all poems is the fun of saying, the style, the liveliness. Messages are for prose. Poetry is more like dancing.

Some people are convinced that good poems are difficult. Generally what makes a poem “difficult” is either that the poem refers to stuff the reader has not yet heard of, or the poem suggests ways of thinking that are unfamiliar to the reader. A new way of looking at things often seems, at first, “difficult.” But we never learn anything if we avoid the unfamiliar. The more widely we read the easier reading gets.

Most writers benefit from finding other writers to make friends with, to read or listen to their words, with whom to share their writing. Some families and some communities regard poetry as strange, and beginning poets can be made to feel very lonely. In situations of this sort, local poetry groups in schools or outside schools can be very helpful. We all need friends who share our interests.

A group of writing friends can put on an “open mike” performance for each other or the public. They can get together and computer-publish their own writing. Working together they will help each other, edit each other, make useful suggestions, and form a local audience for their material. High school and college magazines are very helpful to get people started on a writing career. Often local published writers can be invited to help out or attend performances. I would urge any beginning writer to get in touch with the local writers groups, or to join with a friend in creating such a group.