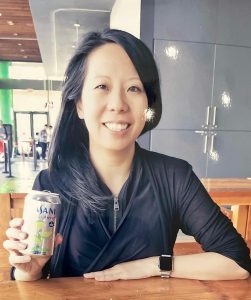 Y-Dang Troeung at the University of British Columbia’s Vancouver campus.

It is with heavy hearts that we grieve the passing of our friend, colleague, and Associate Editor, Dr. Y-Dang Troeung. She was a brilliant, insightful, observant, caring, funny, and courageous scholar. Her interventions within the field of Canadian literature—which included profoundly honest writing, a deep mentoring of students, and advocating strongly for BIPOC students, communities, and colleagues—will be felt for many years to come.

Working at the intersection of Canadian literary and cultural studies, transpacific studies, Cold War studies, transnational Asian literatures, critical disability studies, and critical refugee studies, Y-Dang produced a fiercely beautiful and extensive body of writing. We were fortunate to publish some of it in the journal, including an essay on Madeleine Thien’s Certainty (206, 2010), an interview with Omar El Akkad (with Phanuel Antwi, 240, 2020), and a contribution to a forum on Souvankham Thammavongsa (242, 2020).

More recently, Y-Dang edited a special issue of Canadian Literature called “Refugee Worldmaking: Canada and the Afterlives of the Vietnam War” (246, 2021) which draws together single-authored work and collaborative forum conversations by scholars, educators, photographers, artists, filmmakers, and poets based in Canada, the US, Cambodia, Hong Kong, and France. This scholarship does not just seek to make space for the stories of refugees, migrants, and racialized subjects; rather, it demands that we centre these narratives as we reconceptualize Canadian literature and interrogate the scholarship that is produced through and as part of Canadian literary and cultural studies. Y-Dang continued this work throughout her career, most notably in Refugee Lifeworlds (Temple UP, 2022), “Easter Epic” (forthcoming, 2023), and Landbridge (forthcoming, 2023). 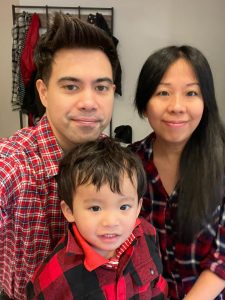 Y-Dang published one other short piece in Canadian Literature as part of a forum on Asian Canadian studies. “Alice Munro Country and Refugee Havens,” originally published in Canadian Literature 227 (Winter 2015): 193-194, brings together Asian American studies, Canadian literature, and autotheory. It challenges liberal narratives of Canadian benevolence and opens up space for the stories of refugee families, including her own. Written in a voice that is vulnerable, direct, thoughtful, and uniquely Y-Dang’s, this essay poses crucial questions about the relations between Canadian “havens” and what she calls the “continuous wars of empire” as well as the cruel kindnesses they produce.

Please find below Y-Dang’s short essay “Alice Munro Country and Refugee Havens.” Beneath this essay, we share a tribute by her partner, Chris Patterson, and links to statements about Y-Dang’s passing from UBC’s Department of English Language and Literatures, the Asian Canadian and Asian Migration Studies Program, the Social Justice Institute, and the Peter Wall Institute for Advanced Studies. A full list of Y-Dang’s scholarly publications, collaborations, interviews, and multimedia and creative work can be found at the bottom of the statement from the Department of English Language and Literatures.

If it is now desirable for Asian Canadian critique to move beyond the nation, what does this mean for the interrogation of local genealogies of Asian Canadian identity that continue to remain invisible? I have been thinking in particular about the history of Southeast Asian refugees in small-town southwestern Ontario, a region of Canada that has for the most part been left of out of discussions of Asian Canadian transnationalism, globalization, and transpacific exchange. Scholar Eric Tang has recently called for a rethinking of transnational methodology in Asian American studies by focusing on those whose migration has been produced not by economic circuits but rather by state war and violence. Whereas Tang examines refugee presence in spaces such as the urban hyperghetto, I’m interested in how the transnational may be accessed through the attention to the rural, and specifically to the presence of the Asian Canadian refugee in the rural.

When Alice Munro won the 2013 Nobel Prize for Literature, I couldn’t help but feel a twinge of pride that a writer from the place “where I was from” had received such world recognition. Having lived the first 18 years of my life in Goderich, Ontario, a small port town on Lake Huron (named after the Huron Indigenous people of North America), I grew up immersed in the world of Alice Munro and her stories. The town of Goderich often appears in Munro’s fiction disguised as Walley, Tupperton, Tiplady, Wawanosh, or Mock Hill. Munro’s stories undeniably helped inspire my deep love of literature at a young age. In the turmoil of my adolescence and the alienation I felt as one of the only Asian bodies in my small town of 7,000 people, I took refuge in her engrossing tales of family betrayal, sexual rebellion, and the strangeness of a familiar place. Hiding away reading in a corner of the only public library in town, Munro’s stories carried me away to an imaginative place, and yet I felt a mixture of recognition and dissonance in how she portrayed the landscapes, rhythms, and feelings of small-town life.

One reviewer comments that Canada’s “dominant author of short fiction, after all, is so identified with small-town Ontario that the rural countryside beyond Toronto is known as Alice Munro Country” (Armstrong 1). Whenever I hear the term “Alice Munro Country,” I feel uneasy about the myths that it perpetuates about this region, myths of white settler inhabitance and homogeneity that make it seem frozen in time. That “Alice Munro Country” continues to be seen as an exceptional space of rural, Canadian whiteness is troubling to me.

As a former refugee from Cambodia whose family, along with that of many other Southeast Asian refugees throughout the 1970s and 1980s, resettled in Huron County in the aftermath of the Vietnam War, I have often wondered, over the years, if my family’s story would ever make into Alice Munro’s fiction. After all, she was well known for drawing inspiration from historical sources, and we made national headlines in December 1980 when Prime Minister Pierre Trudeau held a ceremony on Parliament Hill to officially welcome my family, the last of the 60,000 Southeast Asian refugees to be sponsored to Canada as a part of a special government program (“Pierre”). Later, we made it into the history books. As one scholar notes, “St. Peter Catholic’s Church in Goderich sponsored two brothers and their families in December 1980” (McLellan 38). In many small towns or villages across Huron County, from Goderich to Vanastra to Exeter, I knew other Cambodian, Lao, or Vietnamese families who had crossed the Pacific as refugees. Within our communities, stories circulated about the forms of kindness shown to us by our sponsors, as well as the cruel forms of hate and aggression against which we had to constantly steel ourselves. From the factories to the graveyards to the card parties, we established networks of local exchange and leisure to survive.

Over thirty years later, some of these families continue to reside in the county and have put down roots in the region, yet I continue to wait for their stories to be written into the national imaginary. In the literature of new writers such as Kim Thúy, Vincent Lam, Madeleine Thien, and Souvankham Thammavongsa, some of these stories have begun to emerge. On a website called Compassionate Canada, a group of Southeast Asian Canadians have mobilized through social media to provide testimonial accounts of a time when Canada seemed more compassioned towards incoming refugees. These days in Goderich, storefront shop signs in English and Arabic read, “Ah-I-an wan San-I-an Welcome” and “Mar-ha-bun welcome,” and I recently read a story in the town’s local newspaper, the Goderich Signal Star, about how some members of the community had banded together to sponsor a family of Syrian refugees (Broadley n.pag.).

Alice Munro’s 2012 story “Haven” is a subtle and sensitive meditation on the terror of domesticity felt by a regretful white, middle-class woman in the seventies. I’m interested in producing a different kind of narrative about rural southwestern Ontario as a “haven,” one in which the figure of the Asian Canadian refugee, past and present, is central. How have these rural havens been produced through continuous wars of empire? Which refugee affects circulate within these spaces? And what kinds of circuits and economies of exchange help sustain these refugee lifeworlds? These are some of the questions Asian Canadian critique should make room for.

I am sad to give this devastating news that I know will come as a shock to many. My partner and wife, Y-Dang Troeung (張依蘭) (ទ្រឿងអ៊ីដាង), died yesterday, November 27, after a long struggle with pancreatic cancer. She was a brilliant author, educator, and the most caring and loving partner, mother, daughter, sister and companion. We have been dealing with her disease for over a year, and much longer without knowing it. Since her diagnosis, her life was enriched daily by friends and family, and we have felt lucky to have so many people come forward and support us with food, discussions, advocation, advice, and most of all, warmth and love. She leaves behind all these loving people, including me, our son Kai, her parents, brothers, and extended family. Her life has been a gift to all of us, and she leaves us with one of her greatest gifts: her book Refugee Lifeworlds. In the coming months, we will receive more gifts from her brilliant and compassionate mind: a short film, “Easter Epic”; a family memoir, Landbridge; and other projects she was able to complete before her death.