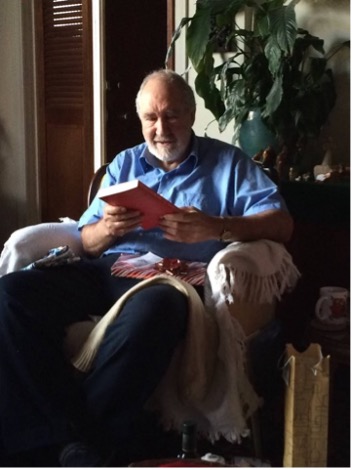 In memory of Ronald Hatch, we’ve collected tributes from past Canadian Literature editors. Ron will be missed around the office, often swinging by to chat and catch up on the latest in canlit.

Ron was a frequent friendly visitor to Canadian Literature and it was always great to visit with him. Ronsdale Press connected him closely to the world of BC publishing, so he was an unmatched source of news from that front. –Margery Fee

Ron taught—inside and outside the classroom—with an impassioned respect for the interdependence of the mystery of the forest and the mystery of words gathering into literature. His unfailing commitment to this intimate correspondence made him for me an inspiration and the ultimate definition of integrity. –Laurence Ricou

Hatch was a gentle bear of a man—whose strong beliefs never stopped him from engaging with others. An enthusiastic publisher, especially of BC writers, he was also a friend, always ready to help, advise, and appreciate a moment of relaxed laughter.  I loved publishing with Ronsdale Press (three books for children, a long essay on irony, and an anthology of comments on Canadian writing by many of the most articulate writers of the last century) because Ron was such a fine editor—scrupulous with text and sensitive to the demands of each project, always keeping the readership in mind.  The anthology, From a Speaking Place, which I edited along with Réjean Beaudoin, Susan Fisher, Iain Higgins, Eva-Marie Kröller, and Laurie Ricou, collects essays and reviews from Canadian Literature.  I admired Ron’s independence, appreciated his patience, and was stirred by his commitment to the world in which we live.  What a remarkable contribution he made to life, letters, and thought in British Columbia. He is already much missed. –William H. New

We’d also like to invite you to read “A Life of Letters and Mountains,” by Ronald’s grandson Forrest Berman-Hatch.