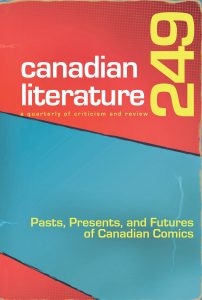 We are thrilled to announce the arrival of Canadian Literature, Issue 249, Pasts, Presents, and Futures of Canadian Comics. Candida Rifkind and Zachary J. A. Rondinelli write in their editorial:

Canadian cartoonists have been prominent voices within the global comics landscape for quite some time, recently their renown has grown thanks to numerous prizes and honorifics. Seth was awarded the Prix Spécial du Jury in 2020 during France’s Festival d’Angoulême and was recently honoured as Chevalier of the Order of Arts and Letters by the French minister of culture. Joe Ollman’s recent work, Fictional Father, received the distinct honour of becoming the first comic or graphic novel to be nominated for a Governor General’s Literary Award for Fiction, and in 2022 Julie Doucet was awarded the Grand Prix at the forty-ninth Angoulême International Comics Festival (the highest award in European cartooning). As Anderson so eloquently puts it in his keynote with Pauls, “[Canadian] work is world-class,” and these recognitions remind us of this important fact. Of course, with this prestige comes a renewed interest in understanding the different traditions and influences that have shaped individual cartoonists and asking how—perhaps even if—their identities as Canadians matter to their art. This special issue represents what we hope will be a reorientation of the Canadian comics conversation, which has long languished in the rhetoric of nationalism and patriotism ignited during the WECA era and refueled in the 1970s when Leishman and Comely’s Tom Evans pulled up his red and white spandex to become Captain Canuck. We say this to reiterate that the story of where Canadian comics began is not the same as when Canadian comics publishing began; contrary to how it might look today, the multi-faceted, aesthetically diverse, and globally networked histories of Canadian comics have yet to be fully captured.