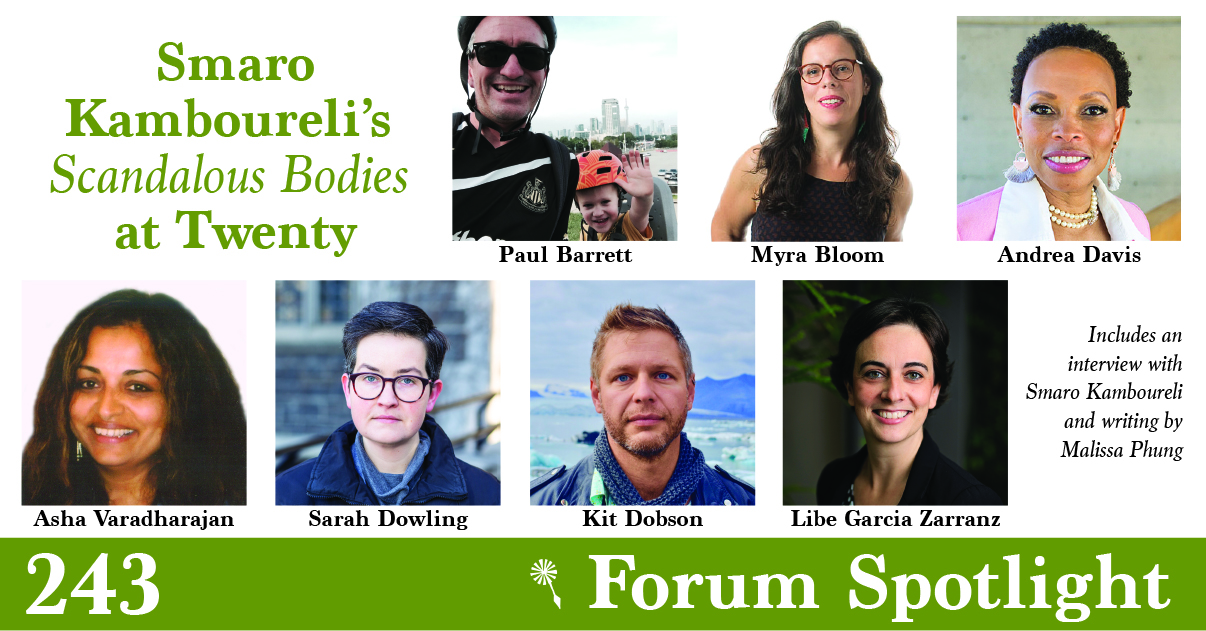 Paul Barrett is an Assistant Professor in the School of English and Theatre Studies at the University of Guelph where he teaches Canadian Literature and Digital Humanities. He is the author of Blackening Canada: Diaspora, Race, Multiculturalism and the editor of ‘Membering Austin Clarke. His current research project considers the history of humanism in Canadian literature from the 1850s to the present.

“Scandalous Bodies at Twenty: An Interview with Smaro Kamboureli”

“The Powers of Representation and Transgressive Fires: Reflecting on the Impact of Smaro Kamboureli’s Scandalous Bodies”

Andrea A. Davis is Associate Professor in Black Cultures of the Americas in the Department of Humanities at York University. She holds cross-appointments in the graduate programs in English; Interdisciplinary Studies; and Gender, Feminist, and Women’s Studies. Her research focuses on the literary productions of Black women in the Americas. She is particularly interested in the intersections of the literatures of the Caribbean, the United States, and Canada, and her work encourages an intertextual cross-cultural dialogue about Black women’s experiences in diaspora. She is the author of the forthcoming Horizon, Sea, Sound: A Cultural Critique of the Nation.

Asha Varadharajan is Associate Professor of English at Queen’s University in Canada. She is the author of Exotic Parodies: Subjectivity in Adorno, Said, and Spivak. Her current research reconceptualizes the category of the refugee and the realm of “refugeedom.” Her most recent publications comment on the crisis of the humanities, the subaltern in contemporaneity, violence against women and the discourse of human rights, decolonizing pedagogy, postcolonial temporalities, humanitarian intervention, and the legacy of the Frankfurt School. The most fun she has had writing was while composing her entry on Eric Idle for the Dictionary of Literary Biography. The most chuffed she has been lately was when she received the Queen’s University 2021 Principal’s Promoting Student Inquiry Teaching Award.

“Justice, Not Identity: What a Woke Multiculturalism Looks Like”

Sarah Dowling is an Assistant Professor in the Centre for Comparative Literature and Victoria College at the University of Toronto. A literary critic as well as a poet, Sarah is the author of Translingual Poetics: Writing Personhood under Settler Colonialism, as well as Entering Sappho, DOWN, and Security Posture.

“Grief, Bodies, and the Production of Vulnerability”

Kit Dobson is a Professor at Mount Royal University. He is most recently a co-editor of the books Dissonant Methods: Undoing Discipline in the Humanities Classroom and All the Feels / Tous les sens: Affect and Writing in Canada / Affect et écriture au Canada (both U of Alberta P, 2020).

“The Scandal of Bodies: Scandalous Bodies at Twenty”

Libe García Zarranz is Associate Professor of Literature in English in the Department of Teacher Education at NTNU (Norway), working at the intersection of feminist and trans writing in Canada and affect studies. She is also Research Affiliate for the Canadian Literature Centre at the University of Alberta. She is the author of TransCanadian Feminist Fictions: New Cross-Border Ethics (McGill-Queen’s UP, 2017). In 2018, she co-edited a special issue on affect and feminist literary production for Atlantis: Critical Studies in Gender, Culture and Social Justice. Her article “Feeling Sideways: Shani Mootoo and Kai Cheng Thom’s Sustainable Affects” appeared in the University of Toronto Quarterly (2020).

“2020 and All’s Well: On Positionality, Transtemporality, and Scandalous Bodies”

Smaro Kamboureli is the Avie Bennett Chair in Canadian Literature at the University of Toronto. The author of Scandalous Bodies: Diasporic Literature in English Canada, winner of the Gabrielle Roy Prize for Canadian Literary Criticism, she has edited and co-edited many volumes. Her most recent publications include her article “Diaspora” in Oxford Research Encyclopedia of Literature; a bilingual English/Italian edition of her 1985 poetry book, in the second person, in seconda persona; and the co-edited special issue “Literary Solidarities / Critical Accountability: A Mikinaakominis / TransCanadas Special Issue” of the University of Toronto Quarterly to which she has contributed an introduction, “Literary Solidarities: ‘Should I be here?’”

Canadian Literature issue 243, Returns, is available to order through our online store at https://canlit.ca/support/purchase/single-issues/.