New Issue: 246, Refugee Worldmaking: Canada and the Afterlives of the Vietnam War 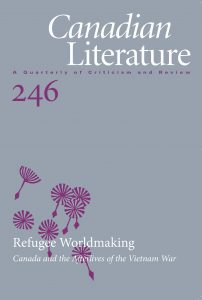 We are thrilled to announce the arrival of Canadian Literature, Issue 246, Refugee Worldmaking: Canada and the Afterlives of the Vietnam War. Guest Editor Y-Dang Troeung writes in her editorial:

To what extent do the unresolved inheritances of past wars and conflicts become legible only insofar as they offer “lessons” for the contemporary moment? And to what degree is it even possible to cite Cambodia, Vietnam, and Laos as a meaningful lesson or cautionary tale for the present when we have yet to adequately look at the example itself, on its own terms? Such rationales also rely upon liberal positivist assumptions of Enlightenment progress, which as critical theorist Alexander Weheliye argues, presuppose “that suffering must always follow the path of wounded attachments in search of recognition from the liberal state” (14). This “liberal notion of wounding” (14) confers legitimacy onto the site of injury only insofar as it illuminates a larger structural pattern. The “exampling” or “lessonification” of suffering also temporally demarcates the event of wars abroad as something that is over and done with, rather than something that is structurally endemic to the enduring imperial conquests of US empire.