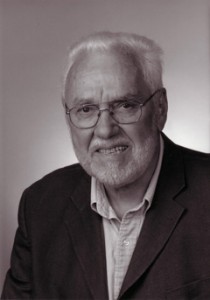 I grew up on a farm in central Alberta and attended the University of Alberta. I worked in the North for six years, then went to graduate school in the US for another six. By the time I was in my thirties I was ready for serious writing. Since then I’ve published nine novels and numerous books of poetry, essays, a travel book, a journal. I forget what else. I worked for 34 years as a professor, half that time in Upstate New York, the other half in Manitoba. I received the Governor General’s Award for my 1969 novel, The Studhorse Man. In 2004 I received the Order of Canada. I have a book of poems coming out next spring with the University of Alberta Press. The title isToo Bad: Sketches Toward a Self-Portrait.

I decided to become a writer one late, grey afternoon after a grade twelve English class in Red Deer High School. My teacher said to me, “You’re always writing. Have you ever thought of becoming a writer?” I had never thought of it up until then; after that I considered nothing else.

Up until then I had thought that all poets were dead and that Bliss Carmen was the only Canadian poet. I was inspired to write by the stories around me that hadn’t been told. I wrote, and write, to fill the silence that was my Canadian prairie life.

I often write by rewriting. For me, to rewrite is to re-imagine the possible poem. I doodle. I dawdle. I dare.

For me, writing comes from much reading and from attention to the details of our extraordinary and ordinary lives. A poem is both about experience and itself an experience. We are all of us poets when we try to name our experiences, our intentions, our longings, our desires, our losses.

What techniques enable us to give those names? Every poem is a kind of naming. We name ourselves into existence. For that reason we have to trust our own voices. We, as they say, give voice, to the silence that is ours. That involves trying on various poetic forms, various vocabularies; it involves studying and praising past writing and yet, paradoxically, saying something new.