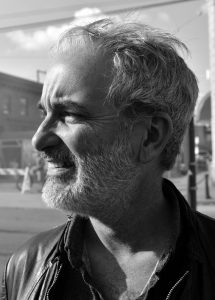 Clint Burnham was born in Comox, British Columbia, which is on the traditional territory of the K’ómoks (Sathloot) First Nation, centred historically on kwaniwsam. He lives and teaches on the traditional ancestral territories of the Coast Salish peoples, including traditional territories of the Squamish (Sḵwx̱wú7mesh Úxwumixw), Tsleil-Waututh (səl̓ilw̓ətaʔɬ), Musqueam (xʷməθkʷəy̓əm), and Kwikwetlem (kʷikʷəƛ̓əm) Nations. Clint is Professor of English at Simon Fraser University; his most recent books are Lacan and the Environment (Palgrave, co-edited with Paul Kingsbury) and White Lie (Anvil, fiction).

The Plague of Orientalism: Reading Kevin Chong in the Pandemic

Reading Kevin Chong’s 2018 novel The Plague in the 2020 COVID-19 pandemic, this article argues that historical conditions, including white supremacy in Canada and liberal democratic anxieties regarding same are rendered in the novel both through representative scenes (a political figure visits patients in a pandemic ward, a protest featuring anti-immigrant and anti-racist participants devolves into a riot) and through such speech acts as trigger warnings and land acknowledgments. An intersection of historicist and psychoanalytic interpretations warn against both simply ascribing textual scenes to a literal writing of the Real, and seeking to cordon off the text from the social.

In this interview, Kevin Chong discusses his 2018 novel The Plague. He discusses its relation to the Camus novel from 1947, what he thought he “got right” about the novel once the 2020 pandemic started, and what it means to write from the privileged perspective of a settler immigrant. Chong also discusses Camus’ humour, the importance of writers of colour expanding the canon from Tolstoy and Camus to Toni Morrison and Kamel Daoud, and why hate crimes still take place in an Asian city like Vancouver. Chong also opens up about his own complicated history of arrival in Vancouver, being both fourth-generation and first-generation Chinese-Canadian.

Canadian Literature issue 245, Pandemics, is available to order through our online store at https://canlit.ca/support/purchase/single-issues/.