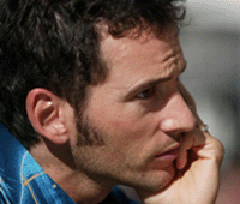 Steven Heighton is the author of the novel Afterlands, which has appeared in six countries, was a New York Times Book Revieweditors’ choice, and was recently optioned for film. He has also published The Shadow Boxer (a Canadian bestseller and aPublishers’ Weekly Book of the Year), Flight Paths of the Emperor andThe Address Book. His poems and stories have appeared in many magazines and anthologies, including London Review of Books,Poetry, Tin House, The Walrus, Europe, Agni, Poetry London, Brick, and Best English Stories. Heighton has won several awards and has been nominated for the Governor General’s Award, the Trillium Award, a Pushcart Prize, the Journey Prize, and Britain’s W. H. Smith Award.

The inspiration to write a poem, a story, a novel, can arise from just about anything—including the inane sign-off of a bubbly news anchor, as in the case of “News from Another Room.” It wasn’t always this way. There was a time when I actively sought out conventional forms of poetic inspiration—love affairs, big losses, stirring landscapes, etc. Now I just keep my eyes open, my senses awake, and I find inspiring material everywhere. One of the most important ways in which writers improve with age—right up there with the acquisition of technique and life experience—is that they learn not to go foraging for poems but instead to become passive, powerful magnets for their material.

Depends on the genre. I’ll talk here about how I write a poem. I write the first draft by hand—sometimes after making preliminary notes, or scrawling out a few lines and leaving them on my desk or study floor for a couple of days, or years—and then I key in the first draft on my laptop. I edit on the screen until I’ve taken that second draft as far as I can, then I print it out and paper clip it to the first draft. Maybe a week later, or sooner, if I’m really fired up, I make scribbled revisions all over that print out. This is my third draft. Then I go back to the laptop and key in the changes I’ve made and add some more: fourth draft. And the process goes on like that, the time between drafts getting longer and longer. Finally—usually after a period where I haven’t looked at the poem for six months or longer—I take it out and go over it again and can’t find anything I want to change. That’s when I consider the poem finished. The whole process usually takes a couple of years, and at the end of it I have twenty or thirty draft pages clipped together: the full fossil record of the poem’s evolution. (I think it’s a good idea for poets to keep all the various drafts of a poem together, because in the later stages of the process, if you can’t get a particular line or section right, you can go back and see what you had in the first or second draft—and sometimes your first thought turns out to have been better.)

Yes, and I got outed. A guy in my grade ten class got his hands on a poem I’d written for a girl (not named in the poem, fortunately) and showed it around. Maybe because it was June, school almost over for the year, everyone in a lax and happy condition, some of my classmates praised the poem instead of mocking it—as if they were looking at sketch portraits created by someone they’d never imagined could draw. They seemed impressed, and I was encouraged.

A few years ago I was asked to write, for an anthology, some lines of advice I wish I could send back in time to my younger self, starting out as a writer. I wrote seventeen “memos to myself,” and over the last few years a number of my students have told me they’ve found them helpful. You can have a look at them by going to my website, www.stevenheighton.com, where they appear under the “Posts” link.

The key, I think, is understanding that everything is connected, so that the mundane act of browsing through a Canadian Tire catalogue, for instance, can inspire a moving poem about a mother’s death or any number of things.